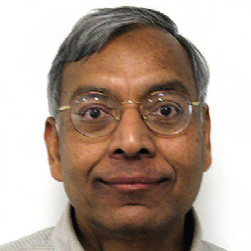 Anil K. Jain is a University Distinguished Professor in the Department of Computer Science & Engineering at Michigan State University. He received a B.Tech. from IIT, Kanpur (1969) and Ph.D. from Ohio State University (1973).

His research interests include pattern recognition, computer vision and biometric recognition. His articles have appeared in Scientific American, Nature, IEEE Spectrum, Communications of the ACM, Computer, Proceedings of the IEEE, Encarta and Scholarpedia.

He has received a number of awards, including Guggenheim fellowship, Humboldt Research award, Fulbright fellowship, IEEE Computer Society Technical Achievement award (2003), and IAPR King-Sun Fu Prize (2008) for contributions to pattern recognition and biometrics. He also received the best paper awards from the IEEE Transactions on Neural Networks (1996) and the Pattern Recognition Journal (1987, 1991). He served as the Editor-in-Chief of the IEEE Transactions on Pattern Analysis and Machine Intelligence (1991-1994). He is a fellow of the ACM, IEEE, AAAS, IAPR and SPIE.

Holder of six patents in the area of fingerprints (transferred to IBM in 1999), he is the author of several books: Handbook of Biometrics (2007), Handbook of Multibiometrics (2006), Handbook of Face Recognition (2005), Handbook of Fingerprint Recognition (2003) (received the PSP award from the Association of American Publishers), Markov Random Fields: Theory and Applications (1993), and Algorithms For Clustering Data (1988). ISI has designated him as a highly cited researcher (his h-index is 58). According to CiteSeer, his book, Algorithms for Clustering Data is ranked # 91 in the Most Cited Articles in Computer Science (over all times) and his paper “Data Clustering: A Review” (ACM Computing Surveys, 1999) is consistently ranked in the Top 10 Most Popular Magazine and Computing Survey Articles Downloaded.