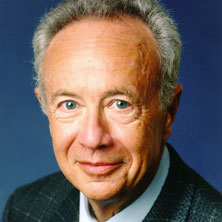 Andrew S. Grove was born in Budapest, Hungary, on 2 September 1936. He earned a Bachelor of Chemical Engineering degree from the City College of New York, and a Ph.D. from the University of California, Berkeley, in 1963. After graduating, he joined Fairchild Semiconductor and in 1968, he helped found Intel Corporation. He became Intel’s President in 1979, and has served as Chief Executive. Grove’s current position is Chairman of the Board.

Since the 1960s, Grove has repeatedly made fundamental contributions to semiconductor devices and technology. His early research helped create stable MOS devices, and improved the reliability of all silicon semiconductor devices, which touched off the explosion of the MOS-based IC industry.

Throughout that industry’s dramatic growth, Grove has demonstrated uncommon leadership and vision, especially in his many roles at the helm of the Intel Corporation. His responsibilities have ranged from overseeing technology and product development to steering Intel deftly into new areas, making it one of the largest and most successful businesses in the world. He is recognized worldwide as an expert of both technology and management.

Grove has written over 40 technical papers and holds several patents on semiconductor devices and technology. His four books have all been very well received, and his 1967 Physics and Technology of Semiconductor Devices is considered the seminal work in the field.

Grove has lectured at universities all over the world, and has been a featured speaker at virtually every major electronics conference. For six years he taught a course in semiconductor device physics at the University of California, Berkeley, and he lectures currently at the Stanford University Graduate School of Business.

Highlights of Grove’s many honors include the AEA Medal of Achievement, the Heinz Family Foundation Award, and being named Man of the Year, Technology Leader of the year, CEO of the Year, Statesman of the Year, and Distinguished Executive of the Year by various organizations.

He is a Fellow of the IEEE and the Academy of Arts and Sciences, as well as a member of the National Academy of Engineering. The IEEE has recognized him repeatedly, beginning in 1966, when he won an Achievement Award, which was followed by the J.J. Ebers Award, the Engineering Leadership Recognition Award, and the Computer Entrepreneur Award. He was awarded the IEEE Medal of Honor in 2000, “For pioneering research in characterizing and modeling metal oxide semiconductor devices and technology, and leadership in the development of the modern semiconductor industry.”

From the 2000 IEEE Honors Ceremony Brochure