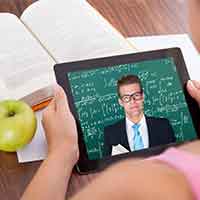 Massive open online courses (MOOCs) are web-based classes with no limit on student enrollment, allowing thousands of remote students to take the same course simultaneously. Although MOOCs haven’t sparked the revolution in education that many anticipated, they have certainly provided learners from around the world with opportunities that would otherwise have been unavailable.

An important concept in the quest for worldwide access to online learning, whether by MOOC or otherwise, is that of “openness.” Since about 2002, such openness has been characterized by the label open educational resources (OERs): freely available web-based materials that were developed for a particular teaching, learning, or research purpose, but that others can reuse for their own purposes. Yet, like many other matters in education, the meaning of the term “freely available” has become a subject of debate — specifically, whether the term should refer to using, sharing, or modifying, with or without any financial considerations.

For the August 2016 issue of Computing Now, we selected articles and a video that examine OERs, MOOCs, and openness, as well as look to the future of online instruction.

“Opening the Instructional Doors to Computer Science and IT—Finally,” by guest editor Sorel Reisman and Eli Shmueli, provides an overview of the types of free digital resources available to educators today, as well as describes the current state of openness in computer science (CS) and information technology and systems (IT/IS) education. The authors present a new initiative from the higher-education consortium Merlot that aims to promote the sharing and use of OERs to teach CS and IT/IS.

Although there has been significant debate regarding the role of MOOCs in higher education, they do appear to be useful in some circumstances. They are not, however, the only solution to all the problems with education, as some predicted. In “The Post-MOOC World,” David Alan Grier suggests that MOOC hype could soon wear off — a trend we have, in fact, witnessed to some degree. Widespread reports of low completion rates and high production costs are among the issues to consider when we hear claims that MOOCs will revolutionarily transform education. (For an interesting overview of the rise and, as some might argue, fall of MOOCs, see the Wikipedia article.)

Sorel Reisman’s video presentation examines some of these matters in greater detail and provides a broad context for reading all of the articles in the August 2016 theme.

The theme of this Computing Now issue spans many IEEE societies and publications. The following four articles from non-Computer Society publications address state-of-the-art methods for MOOC content creation, OER recommendation, and delivery. You can find the articles in the IEEE Xplore Digital Library.

Incorporating video segments in MOOC content has become a widespread practice. “Generating OER by Recording Lectures: A Case Study,” from IEEE Transactions on Education, presents studies that use open source software (OSS) to generate such videos. (Note that, depending on licensing, the OSS software itself might actually be an OER!) Authors Martin Llamas-Nistal and Fernando A. Mikic-Fonte describe student satisfaction with the videos, which were synchronized with slides and segmentation information to support in-video search. They also used local or remote streaming services to enable rich user interaction with course contents. The authors report a significant positive correlation between students’ final scores and the number of video segments they viewed.

Most MOOCs include high-quality content that can be recommended to individual students. In “A Semantically Enriched Context-Aware OER Recommendation Strategy and Its Application to a Computer Science OER Repository,” also from IEEE Transactions on Education, Almudena Ruiz-Iniesta, Guillermo Jiménez-Díaz, and Mercedes Gómez-Albarrán describe IEEE Learning Object Metadata (LOM) for discoverable OERs. These metadata are enriched by three knowledge types, which are validated by experts and organized under the Web Ontology Language (OWL). In addition, the strategy examines user knowledge according to mastery levels, which evolve over learning time. Based on the metadata, ontology, and mastery levels, a recommendation process suggests problems, exercises, quiz questions, and lecture notes to online students. Evidence indicates that these methods increase learning performance and decrease course dropout rates by tailoring the course content to the individual student’s needs.

“OER Recommendation for Entrepreneurship Using a Framework Based on Social Network Analysis,” from IEEE Revista Iberoamericana de Tecnologias del Aprendizaje, demonstrates a mechanism for finding an OER (as a group of URLs) posted on Twitter in order to train a user in a particular domain. Jorge Lopez-Vargas and his colleagues extract URLs as the raw OER materials, and then use social network analysis to discover relationship patterns among users who post those OERs on Twitter. The process begins with finding a human-mediated list of topics by keyword, and then extending the topics by building query expansion via a set of SPARQL queries run against the DBpedia database. Using a search mechanism that the UTPL Science Data Lab provided, a data crawler collects information from Twitter and normalizes the data before the mechanism identifies and ranks or recommends OERs.

Recommender systems can make MOOCs — which are meant to reach a vast audience of learners — even more accessible. The project that Masumi Hori and her colleagues describe in “CHiLO: Using an e-Textbook to Create an Ad-Hoc m-Learning Environment,” from IEEE Frontiers in Education Conference, offers a comprehensive mobile learning system based on existing technologies such as e-textbooks in EPUB3 format, authentication and certification using Mozilla Open Badges, and bulletin boards on social network services. Although similar to MOOC lecturing in some ways, a CHiLO video lasts only about one minute (compared to an average of seven minutes for MOOC videos). Such an m-learning system could help students, commuters, or travelers learn in environments that aren’t usually conducive to teaching and learning.

Some researchers report that, while interacting with MOOC videos, some students tend to skip back to review missed concepts or skip forward past already-understood content. Other learner interactions with MOOC content suggest that students deploy even more complex navigation paths than the instructional designers who developed the video sequences intended. This phenomenon reflects known differences between two-way, in-person instruction and the one-way aspect of e-learning programs, which — especially those using web technologies — have been popular for almost three decades.

Are MOOCs just another kind of e-learning? Should we focus instead on creating high-quality OERs and developing more advanced recommender technologies?

Please share your insights, ideas, and experiences in the comments section below.

Sorel Reisman is a former president of the IEEE Computer Society. He is the managing director of the international, higher-education consortium Merlot, a professor of information systems at California State University, Fullerton, and a Fulbright OER Specialist. Reisman received a PhD in computer applications from the University of Toronto. Contact him at sreisman@calstate.edu.

Timothy K. Shih is a Distinguished Professor at the National Central University, Taiwan. His research interests include multimedia computing and distance learning. He has served as associate editor of IEEE Transactions on Learning Technologies and IEEE Transactions on Multimedia. Contact him at timothykshih@gmail.com.